On 26 February 2020, the first official case of COVID-19 surfaced in Pakistan. By 24 March 2020 the provincial government declared Punjab to be under a lockdown. Complying with standards of procedures set by the state and guidelines provided by the World Health Organization (WHO), the Asma Jahangir (AGHS) Legal Aid Cell has been operating from a work from home basis with an essential personnel only policy at the office premises. This decision aims to not only protect all our employees but also the community at large as per our social responsibility.

While complying with all precautionary measures we have been giving legal consultations to all the clients who have approached the office with legal needs. Their petitions have been drafted and filed with the respective courts where possible pending adjudication when Courts commence the regular work.

In spite of the current prevailing situation, the Asma Jahangir (AGHS) Legal Aid Cell is carrying forward all the tasks and responsibilities it normally does to ensure Access to Justice for all, specially destitute women, children and minorities. The civil society needs to be more prominent, vigilant and rigorous than ever before.

During the months of March and April we have received a total of 137 legal dispute faced by women through our emergency helpline number. While the nature of these legal disputes is diverse, more than 78% (108 out of 137) of these are of domestic violence while it was merely at 38% for the 2 months before COVID-19 outbreak in consequence of which people are now homebound. While many cases remain unreported even under normal circumstances the reported cases for Domestic Violence have literally more than doubled during COVID-19.

The Asma Jahangir (AGHS) Legal Aid Cell has filed 15 cases in the superior courts between 15 March and 21 May 2020, including 4 Habeas Corpus petitions with the Lahore High Court for the recovery of minors and young girls. Two girls belonged to religious minority groups and had been abducted and married. Additional 17 cases have been filed in the lower courts during the same time.

A Public Interest Litigation in the Lahore High Court was also filed for the release of a certain classification of vulnerable prisoners to reduce their health risks during the COVID-19 crisis. The petition was however dismissed as the courts have been generally reluctant to grant any relief to vulnerable inmates despite overcrowding in prisons. 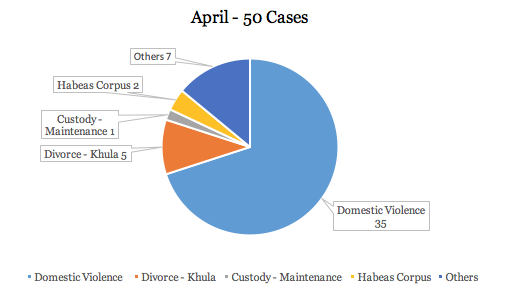 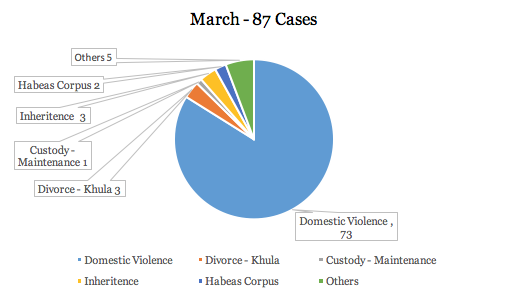 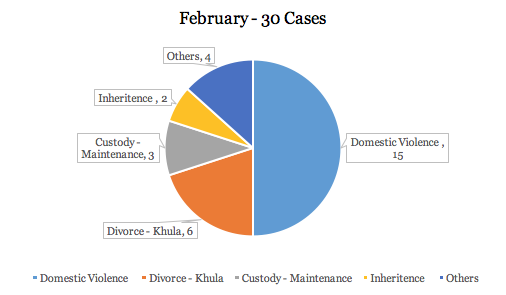 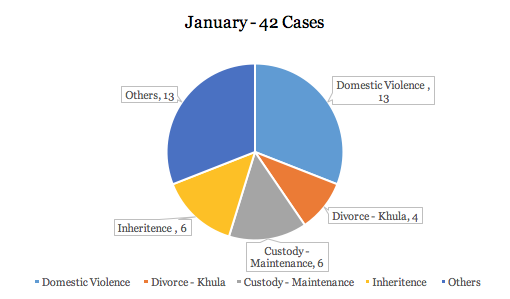 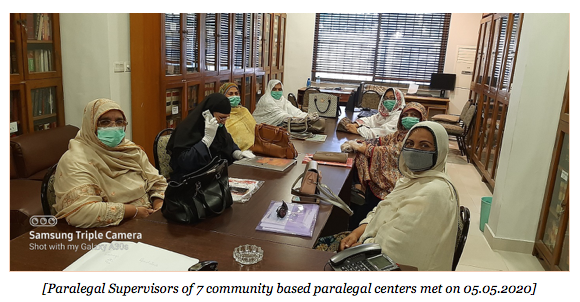 5 May 2020: The Paralegal Project Coordinator Mrs. Hina Shahid and Field Coordinator Miss Rahat Gul met with 7 community center supervisors to educate them about the current situation and to understand the challenges they faced. Majorly a collective response came forward. In each of the communities, domestic quarrels are increasing day by day and becoming more physically violent. The subjects of this domestic violence are not just wives but mothers and daughters too. The extreme and sudden rise in incidents of domestic violence has been caused by mainly three reasons: the lockdown imposed by the government, the family size and loss of employment. On average there are 8-10 members of a family living in a house of two small sized rooms with everyone bound together for nearly 6 weeks already. People feel they have been stuffed together without any possibility of social distancing. The economic fallout and financial uncertainty is causing frustration and giving rise to violence and abuse within households.

6 May 2020: The remaining 8 supervisors were engaged. The mutual concern raised was not just of the physical but also psychological health of women. It was highlighted that the domestic workload has drastically increased for the women of the house, may they be mothers, wives or sisters. With the overwhelming work load the physical health of women is deteriorating. Additionally, most of the men who are the sole breadwinners of the household were daily wagers. They don’t just have no means to earn but they also don’t have any savings to survive on which brings on an existential crisis for these people. Amidst all this uncertainty, these conservative men are choosing the act of domestic violence against the women in their homes as a source of releasing their stress. Being in a state of lockdown, women don’t have access to the options they had before (paternal homes or shelter homes) to protect themselves.

One specific paralegal center supervisor shared a particularly concerning incident from her community. A private donor came for charity ration distribution which was going well until they got to know that this particular community has a decent amount of Christian population. Upon this, they recollected the distribution done to the minority population as they did not want to give the charity they brought to non-Muslims. This blatant discrimination caused grave pain and disturbance to the community.

Following the outbreak of Covid-19 and the ensuing lockdown all scheduled prison visits officially approved by the Punjab IG prison for the Asma Jahangir (AGHS) Legal Aid Cell were suspended under the safety measures enforced  by the provincial government. The situation in prisons was precarious due to over-crowding in 29 jails out of 41 prisons in Punjab.

According to the IG Prison Office, Punjab prisons have a maximum capacity of holding 35,794 prisoners at a time whereas the current prison population is 45,552 as of May 2020. Despite suspension of prison activities, Asma Jahangir (AGHS) Legal Aid Cell has facilitated bail applications of 71 juveniles. Procedures for further legal assistance to prisoners while adhering to all precautionary measures are being negotiated with the prison administration. As a result we have already received 06 Jail Appeals including 03 death penalty appeals and 38 bail applications from 7 prisons in Punjab.

Despite the limitations as a result of the ongoing crisis, the Asma Jahangir (AGHS) Legal Aid Cell is continuing with the provision of free legal aid through coordination and cooperation of the IG Prison Office.